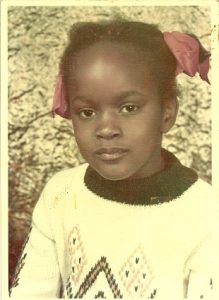 I am a librarian working in an academic library in the centre of London. The collection covers every possible subject that the university students might find useful: philosophy, psychology, business, marketing, oil and gas and banking, literature. I work two evenings a week, and this is when the mature, part-time students visit. One of the regulars is a petite woman, middle-aged but still youthful-looking. She has dark skin and angular features. She is friendly and talkative.

‘How’s the studying going?’ I ask. It’s late, and we both blink at each other under the harsh flourescent light.

‘Oh, you know,’ she says, and laughs, revealing perfect white teeth. I laugh with her.

‘I’m going to assume it’s all going well for you,’ I say.

She laughs a bit more. ‘I’m taking these out,’ she says, pushing a pile of books across the issue desk towards me and handing over her student card.

I really should have asked which course she is studying by now, two terms into the academic year, but I haven’t. Instead, I have merely found myself interested in the books that she borrows. Tonight, amongst the pile, there are books on African philosophy (we actually have books on African philosophy?) and a novel, Joseph Conrad’s Heart of Darkness. I remember how much I hated that book when I read it as part of my undergraduate degree, and how surprised my lecturer had been that I hated it. I scan the barcodes of each book and stamp them with a date set two weeks into the future. I look at the student’s face, now set in a serious expression as she waits for her books. I feel as if we are mirroring each other, dark faces opposite one another – hers more recently from Africa than mine, a product of centuries-old diasporic movement. My mind fleetingly recalls the scene in the Conrad novel in which Marlow encounters the enslaved Congolese people, ‘black shapes crouched, lay, sat between the trees […] nothing but black shadows of disease and starvation….’ [1] I want to say to her, don’t even bother with that book, but I don’t. I’m a librarian. I have to be neutral. Instead, I say, ‘due back in two weeks,’ and hand them over to her. ‘Take care. Don’t work too hard.’

She smiles, piles the books into a tote bag, and leaves.

Forty years earlier, my formal education began. I was four and a half years old when my family moved to Bedford, a town fifty miles from London where I was born. Everyone else in the reception class at my prospective school would be five. Mum had to persuade the headmaster to take me early. ‘She’s been at school in London since the age of four,’ Mum told the yellow-toothed, ferret-faced Mr Limmer. ‘Please take her’. Reluctantly, he accepted me into the school.

Goldington Green School was a red-brick Victorian building with a bold-faced clock staring out from its façade. It stood on one side of a busy main road which cut a swath of grey through the Green leading straight into Bedford Town Centre; Goldington Church stood on the other, ruined and crumbling to young eyes. The church was Gothic and cold, lifeless without its Sunday morning congregation.

The other children knew I was younger than them. They saw my hair in bunches, tied with red ribbons. Grey pleated skirt and v-neck jumper. Bright white blouse underneath. White knee-length socks and red t-strap Clarks shoes. Self-contained and nervous, I refused to give away words lightly.

There were seven of us, including my older sister, Susan. If we were lined up in a row like an identity parade and looked at through glass, there would be a row of small black faces: a face stony with defiance, a toothy, smiling face, a timid face, a face nervously turning away, others, childish and inscrutable. One of the seven was a little girl that the teachers thought I should be friends with. She was black, like me. Skinny and silent, like me. She had my Christian name and my mother’s maiden name, and for this reason I was highly suspicious of her. I decided to keep my distance. Sonia Fergusson and I would never be friends.

Now, I remember that Sonia Fergusson was quite dark-skinned. Smooth baby skin. Deep-brown, honest eyes. Distant, but related to me, somehow? That had been my anxiety.

Instead, I became friends with a girl who was even smaller than I was. Her name was Rebecca Smith. Her freckles and short, streaky-blonde hair reminded me of Jodie Foster, film star of Freaky Friday and Bugsy Malone. Rebecca fascinated me. One of her arms was shorter than the other. Instead of having a hand with five fingers, Rebecca’s right arm ended in a soft, curved bump, with tiny wart-like buds of skin where her fingers might have been. I was impressed by her tom-boy verve. We plotted adventures that would take us to the farthest reaches of the school playing field. We were going to cycle the breadth of Bedfordshire on our Raleigh Fourteens.[2] Snails would be given holidays in shoe boxes and jars.

I knew Rebecca was a special person because eventually she was given a ‘bionic’ hand, like The Six Million Dollar Man. The prosthetic hand matched her pale skin minus the freckles, and as she showed it off in the playground I could see how seamlessly it attached to her arm. She only had to look at it, she said, and the fingers would move. Rebecca Smith became, in my eyes, truly heroic.

I was sitting next to her as usual in the school assembly when Mr Limmer told us that we were about to watch an interesting film. Short films were occasionally shown in assembly, usually to illustrate a particular religious message that Mr Limmer was attempting to convey. The lights in the hall were dimmed, the heavy red curtains drawn. All of us, children aged from five to eleven, sat cross-legged on the parquet floor expectantly, giggling and shushing each other. The reel-to-reel projector rattled into action. The film was old, crackling, black and white but also washed-out grey. We sat in the dark, trying to make sense of what we were seeing.

The film seemed to be about African people – at least I think they were African people. There were men and women, and some children. The people walked across arid land and then around a cluster of mud huts with thatched roofing, wearing little and baring, declaring the colour of their skin. Rebecca and I looked at each other. Even in a televisual world of suggestion and innuendo, full of Benny Hill and Carry On films, I knew this type of nakedness was different. It was without reason or context. It was obscene. Rebecca knew it. I knew it. The boys sitting around us, sniggering, knew it. They should cover up, shouldn’t they? But it’s hot there, isn’t it?

Then the camera’s eye shifted to a group of people engaged in what seemed to be a festival of dancing. First, the people danced in a circle, arms throwing invisible arcs in the air. Some of them, I was relieved to see, were wearing cloths around their waists that looked like tatty mini kilts. Suddenly, frighteningly, a tall figure wearing a grass skirt and a huge white mask, blank except for black-lined eye slits and expressionless black lips, leapt into view. He was holding grass swats in each hand and shook them up and down, reminding me of a Morris dancer flicking his handkerchiefs. Other figures wearing masks joined the tall one. The images were punctuated with commentary which made little sense to me: ‘The sense of mimicry is highly developed…acting as Native Police is a popular turn.’[3]

The spectacle seemed to go on for a very long time. Apparently, all of this had something to do with me, but I couldn’t work out what. When the film ended, the curtains were pulled open again, and the end of the reel snapped to a finish, I felt hot with shame. I could hear Mr Limmer talking, but the words reached my ears as heavy echoes, as if I were under water. I began to question my place in Goldington Green School, as a girl who lived in Goldington Green, Bedford, England, The World.

Forty years later, I am reading pithy one hundred and forty character messages on a small screen. One of them takes me back to forty years past, to that strange assembly sitting next to Rebecca Smith: ‘Bedford kids learn Traditional African Dance for School Play’.[4] I cannot believe what I am reading; the information collides with the memory I carry with me from that day. The article reports that the children learned the dances for a play based on the life of an Ashanti king. We had sat and watched a film about African people, encouraged to deny any connection to them.

Now, my old primary school is twinned with a school in Ghana.

Any cookies that may not be particularly necessary for the website to function and is used specifically to collect user personal data via analytics, ads, other embedded contents are termed as non-necessary cookies. It is mandatory to procure user consent prior to running these cookies on your website.