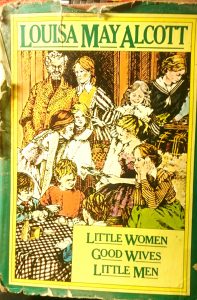 I don’t know where the impetus came from. My sister and I just read a lot. There were books at home, but we knew without thinking about it that libraries were where we could find more. I remember the mobile library that turned up for a while near where we lived in The Fairway, Bedford – its narrowness and murky interior, and the books encased in plastic covers.

The first book to have a major impact on me was Louisa May Alcott’s Little Women. I read an abridged version first (we seemed to have some abridged versions of novels at home, like Dr Jekyll and Mr Hyde), then I badgered my Dad to buy me a handsome illustrated hardback edition of Little Women, Little Men and Good Wives. I loved Jo. I liked them all and felt so sad for Beth (but gripped by the tragedy of her death), but Jo was important. By the age of seven, I was a self-identified tom boy.  Jo March was a tom boy too. But more importantly, she wanted to be a writer, and so did I. She was clever and brave, she read and read, she was friends with Laurie the boy next door, and I was heartbroken that she rejected his marriage proposal. But this portrait of a resourceful young woman was a powerful indication for me of how to be a girl. I also read Anne of Green Gables, Nancy Canadian Schoolgirl,  The Hunting of Wilberforce Pike, the Just William stories. But Little Women made the most impression. I wrote short stories, sometimes longer ones, as un-selfconsciously and naturally as if I was eating or sleeping.

I read Wuthering Heights when I was ten. It was 1978, and Kate Bush’s song Wuthering Heights was in the pop charts at the same time. My imagination soared. This was new territory – I didn’t understand all the language but I was gripped. Then I read other Bronte novels, possibly at the suggestion of our friend and neighbour Susan, who was five years older than me. My Dad bought me a red and gold-embossed hardback copy of Jane Austen’s Pride and Prejudice, and I loved it. I began to write a Victorian saga featuring three sisters, very much influenced by Wuthering Heights and the Brontë sisters, and I illustrated it with felt tip drawings. Years later, I looked at these stories and realised – all the characters were white. I had read so much, but there was no-one like me in the books that I read.

During my teenage years I read terrible romances and some teen fiction, as well as adult contemporary fiction. None of it left much of an impression on me. Music took over and affected everything that I did. I wrote (dodgy) poetry influenced by Cocteau Twins song titles and the names of works by artists like Jean Tinguely. Then I discovered Virginia Woolf and Mrs Dalloway. Woolf’s words have never left me. My habit of using too many ampersands came from emulating her. I felt that she captured life in space and time as it really is.

In my twenties and thirties I began to wonder how to be a black woman. I studied for an English degree part-time, while I worked in record shops and book shops and, eventually, libraries. Toni Morrison’s Jazz was on my reading list and it was like a bolt of brilliance. I was awestruck by its boldness. But Andrea Levy’s Never Far From Nowhere was one of the first books I read that contained characters like me: young black women growing up in Britain. I read all of Levy’s novels. Fruit of the Lemon reminds me of my unearthing of cultural identity. Levy’s books were, now I look back, teaching me how to be a black woman. When I studied black women’s writing for my PhD, my knowledge gathered momentum. I learning to articulate my female-gendered blackness through my reading and writing.

Zadie Smith’s  novels were exciting, relevant. Bernardine Evaristo was, and is, an innovator, more brilliant than she is ever given credit for. Black identity and fiction were, it turned out, not incompatible. Beryl Gilroy’s Black Teacher and Buchi Emecheta’s In the Ditch are touchstones.

My favourite books of the last few years are: A Girl is a Half-Formed Thing by Eimear McBride, for its intensity and experiments with language; Mr Loverman by Bernardine Evaristo, for its humour, rich evocation of character and focus on older black masculinity and homosexuality; Citizen by Claudia Rankine, for its achievement in expanding what poetry can be in terms of form and content and the social impact it can make; and Ruth Ozeki’s A Tale for the Time Being, which is about authorship, Buddhism, the environment and memory that wears its scholarship lightly.

All these books and more have made me.